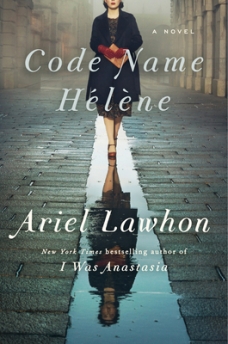 Told in interweaving timelines organised around the four code names Nancy used during the war, Code Name Hélène is a spellbinding and moving story of enduring love, remarkable sacrifice and unfaltering resolve that chronicles the true exploits of a woman who deserves to be a household name.

It is 1936 and Nancy Wake is an intrepid Australian expat living in Paris who has bluffed her way into a reporting job for Hearst newspaper. She is fighting to cover the disturbing reports of violence coming out of Vienna and Berlin when she meets the wealthy French industrialist Henri Fiocca. No sooner does Henri sweep Nancy off her feet and convince her to become Mrs. Fiocca than the Germans invade France and she takes yet another name: a code name.

As LUCIENNE CARLIER she smuggles people and documents across borders under the guise of an oblivious mistress. Soon enough the Gestapo hears of a female operative with a remarkable ability to evade capture, and Nancy earns a new nickname: THE WHITE MOUSE. But this one carries with it a five million franc bounty on her head. Forced to escape France and leave Henri behind for the safety of both of them, Nancy enters training with the Special Operations Executives, who transform her into Hélène. Finally, with mission in hand, Nancy is airdropped back into France as the deadly MADAM ANDRÉ. She soon becomes one of the most powerful leaders in the French Resistance, known for her ferocious wit, her signature red lipstick, and her ability to summon weapons straight from the Allied Forces. But no one can protect Nancy if the enemy finds out these four women are one and the same, and the closer to liberation France gets, the more exposed she–and the people she loves–will become

Going from a little-known, extraordinary historical figure, Nancy Wake has finally been brought forth into the limelight by this fascinating novel as well as being brought to life on the big screens in the movie Liberation which is out soon. (COVID-19 dependent now!) So in the absence of cinema outings, or in fact any outgoings anywhere, now is the perfect time to pick up a good book and get reading. And this book is the perfect one for that!

In this historical fiction novel the story is derived from true life events and the real life of Nancy Wake, who during WWII went above and beyond for her country, showing incredible courage, resilience, spirit and determination in the face of the enemy and her adversaries, all whilst wearing her signature red lipstick!

Hélène was just one of four code names used by Nancy Wake along with Lucienne Carlier, Madam Andre and the White Mouse. She was loved by the people around her and the countless people she helped, yet she was feared and hunted by the German army who even but a huge bounty for her capture.

She managed some truly amazing feats against the Nazi’s such as training with Special Operations, playing a major role in the French resistance forces, smuggling people out of occupied France as well as delivering orders, weapons, and supplies to the men working with the French resistance, and this book takes us with her on some of her deadly missions.

Alongside her heroic missions this book shines brightly with her love for husband Henry Fiocca, their marriage and this story alternates between Nancy the spy and Nancy the wife. Her successes as well as the high prices she had to for pay and endure for it.

The level of research that has gone into this book truly brings Nancy alive across the pages as well as bringing history to life.

Even if historical or war stories are not for you I would still highly recommend giving this book a chance. It may be set in WWII and include espionage, but this book is so so much more than a war story.

This is a story of an amazing heroine who deserves to be recognised and remembered and the quality of Ariel Lawhon’s writing has done Nancy proud!

Code Name Hélène was published on 31 Mar. 2020 and I strongly advise you to grab a copy now. A heart wrenching, heart warming, inspirational story for any book lover, regardless of your usual genres. This is a must read for anyone and everyone that enjoys  a brilliant, well written book.

Buy it now from Amazon or your local book shop if they are still open during this epidemic!

The author of I Was Anastasia (2018), Flight of Dreams (2016) and The Wife, The Maid And The Mistress (2014), is a critically acclaimed writer of historical fiction. She lives with her family in the rolling hills outside Nashville, Tennessee.

A massive thank you to the author Ariel Lawhon, publishers Headline and Anne Cater for my copy of this book and place on the blog tour in exchange for an honest and independent review.

I have just had the most stunning bunch of flowers delivered 😻😻 Shame the photos don’t do them justice!! 🖤🖤🖤 #blackroses #roses #bestflowersever #stunning #gothroses #bestboyfriendever #lucky
Every Last Fear by Alex Finlay Blog Tour 19 March
My new book arrived early 😍
The Blame by Kerry Wilkinson
500 years ago: eight martyrs were burnt to death
The Burning Girls by @cjtudorauthor blog tour 24 Jan 🖤